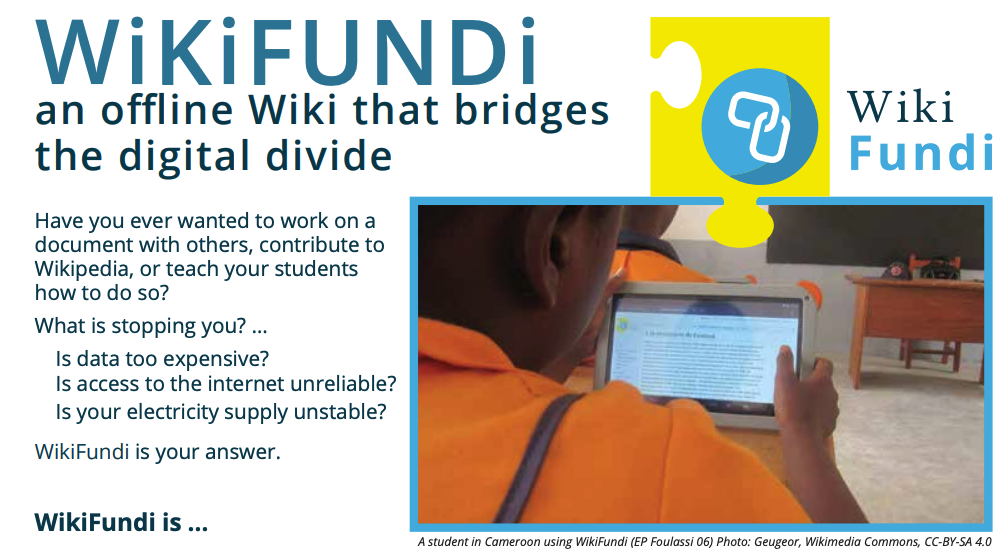 Now in Spanish, English, and French.

For most people reading this, being online has become an integral part of our lives. It is how we function, work, communicate, collaborate, and connect to our families, friends, communities, and colleagues.

Yet nearly 37% of the global population is not connected at all. For most people, being offline is a mild inconvenience, but for these 2.9 billion people it is their daily reality as the digitally excluded.

These 2021 statistics from the ITU reveal what they term a “connectivity ‘grand canyon’” separating the digitally empowered from the digitally excluded. In 2021 it was estimated that 96% of the 2.9 billion humans who remain offline live in the developing world.

An offline solution to closing the digital divide

What if we could use an offline solution to make people comfortable with and skilled in using the digital and online world?

In 2015, WikiFundi was designed, developed and created to bridge this ‘connectivity grand canyon’ and provide a way for those who cannot access the internet – either permanently or temporarily – to learn key digital and content creation skills whilst creating articles about their context, surroundings and interests. Once the content is created, it can either be accessed locally or can be transferred and added to Wikimedia projects or other MediaWiki-based sites.

The WikiFundi 1.0 editing interface with a Wikipedia offline library and hosts of training resources and materials was released in English and French in 2017.

The “Fundi” (/ˌfʊndɪ/, not /ˌfʌndɪ/) part of WikiFundi is based on a southern African word that means expert, authority or guru. It is used as an informal label, as in “you’re such a maths fundi”.

The use of the term Fundi is a play on words. WikiFundi teaches you a skill, and it also gives access to knowledge. It is a clever platform that teaches you how to teach others by writing articles about things that you are passionate about.

In January 2022, Wiki In Africa is proud to announce that WikiFundi is now available in Spanish, along with updated French and English versions. Each language version is supplemented with updated, expanded and entirely new teaching, training and reading materials and resources.

WikiFundi is accessible via the digital device of learners or trainees through the closed network (similar to wifi) powered by a Raspberry Pi device plugged into the mains or a battery pack. The WikiFundi interface simulates the experience of editing Wikipedia. Entire classes, groups or communities can work together whilst learning how to engage with a digital interface as they read quality articles, navigate the device and write articles collaboratively.

An online future through offline training

Insufficient skills are the first culprit blamed as an impediment to meaningful connectivity. WikiFundi provides the interface, tools and materials needed to introduce and train people in skills while they are also contributing to local or global knowledge. There are so many ways for people to engage, the limit is only the trainers’ imagination.

Since launching in 2017, Wiki Fundi has been used in K-12 (primary (aged 6-12) and secondary (aged 13-18 years) classrooms, as part of adult-education and afterschool programs, for Wikimedia outreach and training by Wikimedia communities and for digital skills acquisition and coding development by fledgling digital entrepreneurs.

Its most notable impact has been through the annual WikiChallenge Ecoles d’Afrique, run annually since 2017 by Wiki In Africa in collaboration with Fondation Orange and Wikimedia Usergroups.

The 2021 contest took place in 100 primary schools across 9 African Francophone countries. The contest resulted in 138 articles being written, the contribution of over 800 photos. There were 20 primary schools that won prizes.

Further, in 2021 WikiFundi received the Open Asset award from the Open Education Awards for Excellence.

Sounds good? Here’s how to get WikiFundi for your community

WikiFundi, the platform/software, resources and its documentation is licensed under CC-BY-SA 4.0.