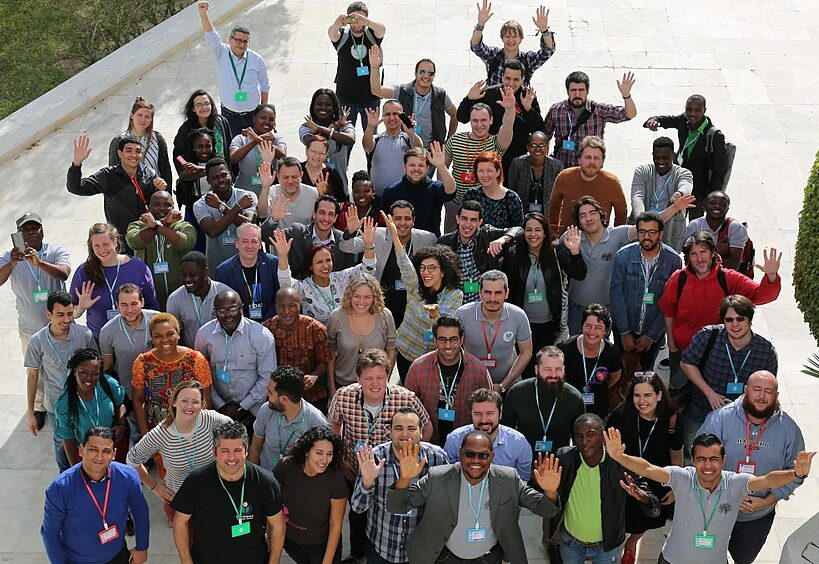 Wiki Indaba is a conference that brings together Wikipedians from across Africa and beyond to discuss the Wikimedia Movement in Africa. Between the 16th–18th March 2018, the third edition of the conference was held in Tunis, Tunisia by the Wikimedia Tunisia Usergroup.

Florence and Isla from Wiki In Africa were lucky enough to receive scholarships to attend the three day conference to present several of the projects. Delegates came from 28 countries, the majority being from Africa (from Algeria to Zimbabwe and many in between) with others coming from Europe and the US.

The programme started on the 15th with a fascinating photo tour of the Medina in Tunis. The Medina was the focus for Medinapedia and part of the tour took in several of the buildings and souks that were covered by the project as well as mint tea on the rooftop of the Dey Palace overlooking the Medina at night.

The next day, the first day of the conference saw a full programme with discussions ranging from how affiliates can work better together and how to get grant support from the WMF. There were Lightning Talks about projects, and a Developer’s and separate Gender Gap meetup (where members were introduced to Ana from the Web Foundation). After the coffeebreak, the Florence hosted the Education in Africa Roundtable and presented WikiChallenge African Schools, along with Walaa from Egypt, Sam from Côte d’Ivoire and other education programmes around Africa. Later on in this timeframe there was also the chance to discuss WikiFundi experience in Tunisia through the Offline Projects: Updates and Opportunities section. That night, there was a great party at the local beach bar a short walk from the conference venue. Wiki Loves Africa had an exhibition of the main images over the last 3 years.

The second day included Lightning talks, WikiData Workshops, Usergroup and Community Management Sessions and the Partnership Clinic. John Cummings announced that through his work at UNESCO he has managed to secure CC-BY-SA licence for The General History of Africa, the most thoroughly researched compendium of African history, written and researched by African academics and historians.

Towards the end of the day, after a discussion on the future of Wiki Loves Monuments in Africa, Wiki In Africa’s Isla had the opportunity to present the winners of Wiki Loves Africa 2017.

Just after the presentation of the winners, N’fana Diakite from Mali presented Florence and Katherine statues as a thank you from Mali for the support he has received on WikiChallenge African Schools and the Wiki Loves Africa local interventions. That night there was a trip to picturesque Sidi Bou Said. On days 2 and 3, Fay Lafaille took some crazy photos of the participants.

The next day was spent in culminating the strategy and dreams for Wikimedia across Africa (Future of Indaba), and the hopes for Wikimania in Cape Town. Katherine and Nicole also presented an update on the Movement Strategy process.

It was an amazing few days – the programme was well balanced and the glimpses into Tunis were lovely and left us wanting to see more! Each Wiki Indaba shows that with passion and dedication the growth of the Wikimedia Movement in Africa is assured. There is also increasing support and interest from other projects with in the Movement.

Thank you to Wikimedia Tunisia Usergroup for organising and the Wikimedia Foundation for the scholarship support!