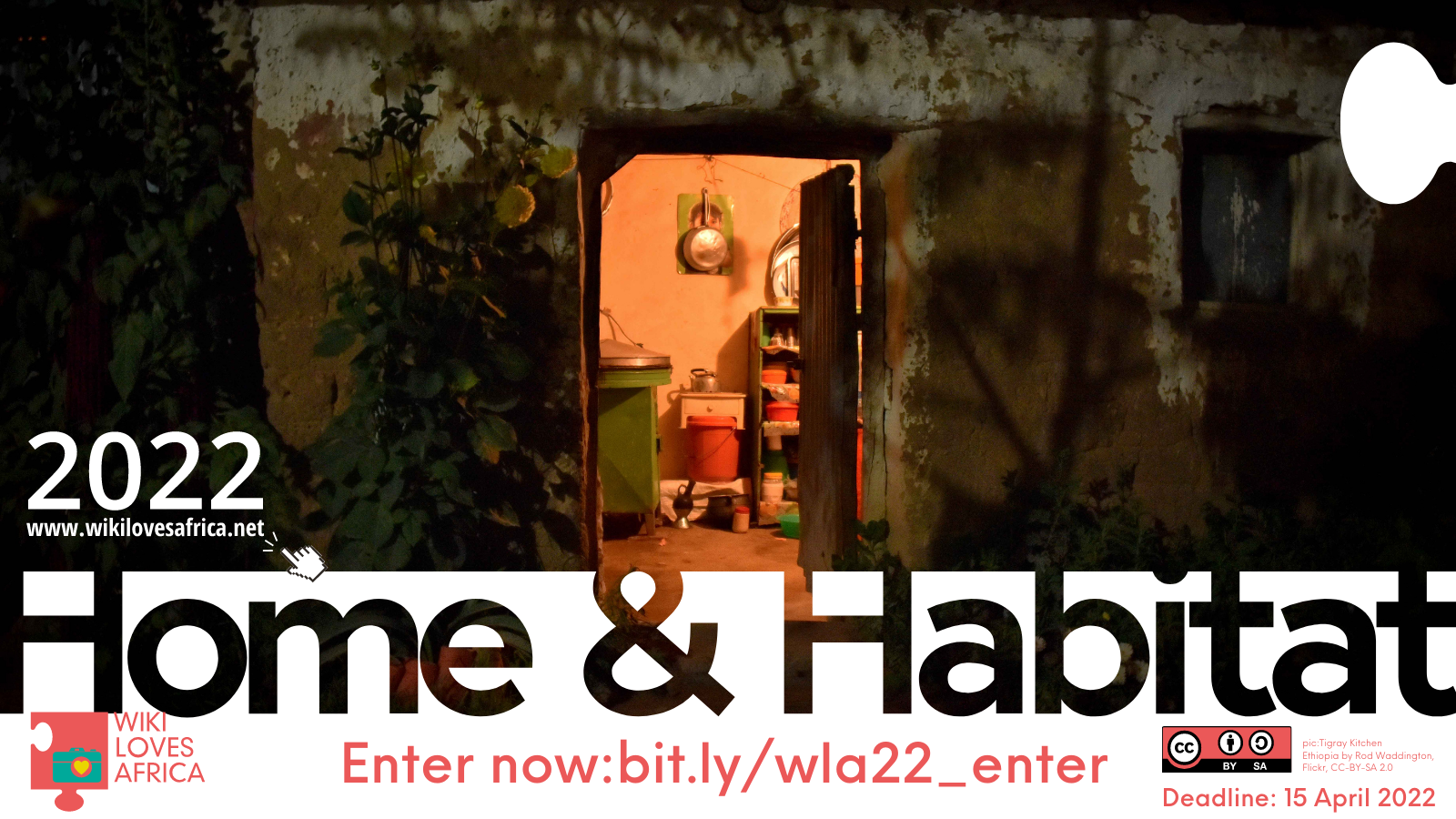 Intimate portrayals of “home” are exquisitely captured by the prize-winning images and videos of this year’s Wiki Loves Africa competition. The idea of home is an emotive subject and this year’s winners do not disappoint, framing the many factors – intimate, communal, individual, cultural, interior, and exterior – that compel us to return and take comfort.

Each year, Wiki In Africa (www.wikiinafrica.org), the international organisers of Wiki Loves Africa (www.wikilovesafrica.net) sets a thematic challenge for the global photographic community – to submit photographs that present the everyday reality of Africa. The competition has been running since 2014. Since then, the competition has encouraged the contribution of nearly 89,000 images to Wikipedia’s image bank under a free licence. Since January 2017, these images have been collectively viewed 1.15 billion times on Wikipedia articles.

This year, the Wiki Loves Africa competition called for photographers to contribute images that reflected its 2022 theme of Home & Habitat as it exists within the African context. The continent-wide call and events resulted in 16,265 entries from 1,111 media specialists and photographers, 75% of which were entirely new to the Wikimedia projects. Once the competition closed in April 2022, it was the incredible task of the 5 tier jury process to pick out the winners. After an initial review of all the entries by a volunteer team of Wiki Loves Africa organisers and Wikipedians, The Wiki Loves Africa 2022 International Jury is made up of 12 professional photographers from Africa (including past winners) and international Wikimedians who are Commons experts. The quality of images (visually arresting and well framed) was a key criterion in the selection, as was the encyclopaedic value of each image.

The 1st prize of USD$2000 goes to Summer Kamal (Egypt) – a return Wiki Loves Africa prize winner – for a gentle image of a man in the later years of his life pausing in contemplation amid the facades of his culture. Announced alongside Kamal are the two additional winners of the top 3 prizes. Two additional prize categories are for the Best Video entry and Special Collection.

Kamal spoke about why she took this particular image:

“I had taken this picture because I was walking in the narrow alleys of Nuba while the night was creeping in to give this charming blue light. House number six and this old man is sitting in front of his house safe and secure, surrounded by a similar group of simple small houses. I liked this picture, so I took the photo right away.”

One of the jury members, Aboubacar Kamaté (and Wiki Loves Africa Best Video prize winner for 2020 and 2021) said about the image:

“I really like the image. Its tint, the decorum is artful and clearly, its author is nothing sheer of a great and master painter with her framework and what’s given to us to feast our eyes upon on her gem”

“I took this picture as it’s part of an ongoing documentary project I’m working on. I think it fits this year’s theme which is Home. It shows what home could mean to some people around the world.”

“It’s a natural moment in this family’s life. It is quite busy, as there are many different things happening in the photo, but it is good to show how layered home life is for this family.”

Third prize (USD1000) was awarded to Planning Ahead by Ayorinde Ogundele (Nigeria).

Ogundele took the picture because he wanted: “to document everyday life. To show how people adapted during the pandemic. I wanted to highlight the resilience in people and how they utilise serendipity to their advantage.”

This year’s video prize went to the charming and beguiling, and yet contextually encyclopaedic, story of a boy dreaming of a home for his family as he travels to school through the streets of Port Harcourt, Nigeria.

Videographer Green Wilfred Somoni “drew inspiration from my childhood to make the video, Dream Home. As an only child with a single parent from a poor background, I always dreamed of giving myself and my mother a better life. I entered my video to Wiki Loves Africa not just to satisfactorily resonate with the theme of this year’s contest, but to share a story about the reality of many children from poor homes in Africa.”

Finally, the organisers are excited to announce the winner of an additional prize category. This year a US$750 prize is awarded to a collection of images that tell a story. This year, the jurors felt User:Myousry6666 photo essay Windows Stories was poignant and beautifully executed, and fascinating in the representation of multiple stories framed in each window.

“Since I started shooting in 2010 and during many trips and photography workshops in the street, I made this photo collection of windows. Windows always fascinated me.

Different windows and different stories … but each Window has its own story.

‘Behind every window, a story’, I always tell myself when I watch a window at any time. So many windows, so many stories. And behind each window is a person experiencing their versions of reality; each room is the world for someone. It’s mind-blowing if you think about it. Faces leaping over the windows, constantly in search of a world unknown, numerous questions arising out of curiosity about the way life moves on and this world revolves about.

This curiosity is well supplemented with some drama of fairy tale stories, adding some incredible essence to the joy of livelihood. You cannot segregate these moments to any age group, everybody has their own stories to dream about and to share within themselves. Reassuringly, the sea of windows — dark or lit — remains. And behind every window, a story.

This photo collection summarised 12 years of shooting different windows and different stories in my country Egypt.”

Every year, Wiki Loves Africa provides a platform for thousands of Africa’s photographers to take back the visual narrative by celebrating Africa’s cultural diversity and contemporary reality on Wikipedia.

After an initial review of all the entries by a volunteer team of Wiki Loves Africa organisers and Wikipedians, the international jury of twelve professional photographers from across Africa and Wikimedia photographic specialists from around the world considered and deliberated on the collection. The quality of images was a key criterion in the selection, as was the encyclopaedic value of each image, and whether an image was visually arresting and well framed. It was equally important to unearth the unexpected.

At its heart, Wiki Loves Africa is a drive for Africans to document Africa. Both amateur and professional photographers and filmmakers are called to share the world that they view every day; life recorded and observed from within their own communities. Their contributions form a collection of royalty-free images about Africa, a continent that is often subject to a condemning external gaze and many subsequent stereotypes.

Through the competition’s eight editions 88,640 images have been added to Wikipedia’s media library, Wikimedia Commons, by 10,380 photographers from across the continent. The images have a life beyond the competition, with these images being placed in articles on Wikipedia, and thus being viewed over 1.1 billion times since January 2016; with 26 million views of the images in September 2022 alone.

Wiki Loves Africa is a Wiki In Africa initiative that is activated by the Wikimedia community that created Wikipedia in support of the WikiAfrica movement. The competition was conceptualised and is managed by Florence Devouard and Isla Haddow-Flood of Wiki In Africa as a fun and engaging way to bridge the digital divide by rebalancing the lack of visual representations and relevant content that exists about Africa on Wikipedia. The competition is funded by the Wikimedia Foundation and supported in kind by UNESCO and a host of local partners in individual countries. The images donated are available for use on the internet and beyond, under the Creative Commons license CC BY SA 4.0.

Watch a special edition of WikiAfrica Hour where we meet the Wiki Loves Africa 2022 Winners.

The international prizes are:

Wiki Loves Africa is an annual competition that crowdsources photographs, videos and recordings of Africa to form an open licenced archive of materials that tells the story of Africa on Wikipedia through the eyes of its people. Each year the contest is held, it has had a different theme that is universal, yet culturally rich.

Over the last 8 years, Wiki Loves Africa has achieved the following:

You can view the international winning images from all years here.